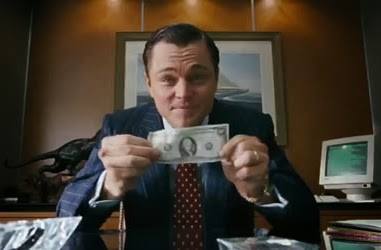 DiCaprio bringing us down but brilliantly

Last night my friend Tim and I went to see The Wolf of Wall Street. I was eager  to see it because I think there are few filmmakers around with the imagination of Martin Scorsese and his films are always better on the big screen.

I was also curious and skeptical of the controversy surrounding it. I know there are people who are suggesting a boycott of the picture because they claim that it glorifies the misdeeds of criminals. As a storyteller that attitude sometimes irks me because it suggests that we only want to see happy, smiling people having fun and pretend that greed and suffering doesn’t exist.

Well in this case I was really wrong. Though the film was wildly entertaining with scenes that are sure to be considered classic and parodied forever, the movie is one long commercial for the “American Dream” but completely ignorant of the real damage caused by its dark side.

There is a beautifully performed scene by Matthew McConaughey. He plays a Wall Street stockbroker explaining how he doesn’t create or build anything that HIS “product” is made of fairy dust. He means that the stock market is just a cluster of mental agreements based on illusion. He relishes the fact that he has found a way to have a luxurious lifestyle without working any harder than getting on the phone and fooling people into buying stocks that he knows are worthless.

Never in the entire film do we see any of the victims on the other end of these Wall Street phones. {SPOILER ALERT} and the punishment that our “hero” receives is a total joke of no real consequence to him. {SPOILER OVER}

The Dream Factory has manufactured another one for us and I think that we are naive if we discount the power that films like this have in our society.

After the film I turned to a man in another row and asked him what he thought of the movie. He said he was a college sociology teacher and that the movie would most likely give his male freshman an erection. I took that to mean not for the sexual content but for the glorification of money and what it can bring a guy.

I can remember being 5 years old and having lust for wealth and fame (though probably not thinking much about snorting cocaine off of the breasts of hookers).

Myths We Live By

Sometimes it seems to me that we are all members of “The Cult of More”: Money is your source of happiness and the more cash you have the happier you’ll be. I believe this myth is completely self generated by our society, by the stories we tell ourselves. The world we have in this Country is a direct result of our unique American mythology. We craft and build our society right out of our stories. And though it happens so subtly and smoothly, there are real, lasting, tangible effects of these myths.

I remember before the housing crash in 2008, there were posters everywhere in our low income, up, up, upper Manhattan neighborhood advertising mortgages for no money down and no proof of income. It is hard to fault someone who is living in a tiny apartment, with their entire extended family being attracted to these pie in the sky mortgage products concocted by Wall Street. And now of course many of those people have lost those homes while Wall Street is having another hay day as I write this.

Snortin’ the Now Away

The most disturbing thing to me about this movie the fact that it tries to paint these characters as masters of living for the moment. They seem to be having the time of their lives. Trollish nerds  bedding beautiful young women, guys landing their personal helicopters in their backyards after a night of laughter and debauchery, sailing through Capri on their 100 foot yachts.

But as a devout Nowist, I know that these guys are not seizing the moment, they are hiding from it. When you are truly alert and alive to the Here and Now you don’t need cocaine and quaaludes to help you make it through the day.

The movie is selling an idea that is a total lie and it is doing it quite well. I could feel my pupils dilate when Leonardo DiCaprio buys that beautiful yacht.

So the next time you wonder why it is that you can’t seem to be satisfied with what you have, or the next time you hear a tiny voice in your head telling you that you are not quite successful enough, know that just about every message that surrounds you is designed to have you think you are incomplete.

When they want to brainwash political prisoners they make them listen to propaganda on loudspeakers 24 hours a day. That is what our modern media is: propaganda for the cult of more.

But you can be be de-programmed if you have the courage!

Here are some tips for snapping out of trance:

What are YOUR thoughts about it?

A Reason Happens for Everything
Scroll to top