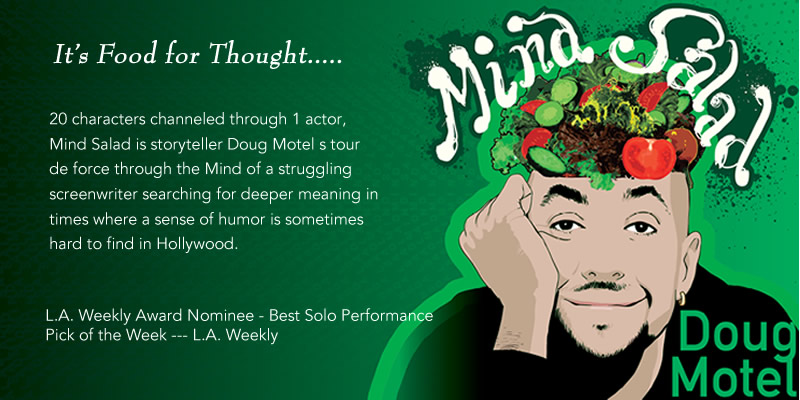 Struck with a bad case of “very loud mind” he decides to move to Hollywood (!) to quiet his chattering Ego (a cross between Jeeves the Butler and Satan)!

Follow Mick as he relives the hilarious and terrifying journey of a life chasing worldly attachments with the Inner Critic as his tour guide.
Twenty characters channeled through one actor.

“Channeled through writer-performer Doug Motel’s quick mind and extraordinary characterizations…Motel animates each of his characters, who illustrate serious flaws in the human condition, with a full personality, his specialty being a perfect ear for dialects.”
L.A. Weekly Award Nominee – Best Solo Performance
Pick Of The Week
Tom Provenzano – L.A. WEEKLY

“Doug Motel thinks funny and that’s the first requisite for creating humor….He’s a master of dialects…Motel’s art is portraiture, and his likenesses are often startling, vocally and visually…His black drag queen guardian angel sparkles, like most of his juicy creations…A delight.”
T.H. McCulloh – LOS ANGELES TIMES

“If Tracey Ullman and Eric Bogosian had a child, he would be, in both appearance and characterizations, Doug Motel. Here is a performer so immersed in his craft that you wonder where his characters end and what his real identity is…His writing and performing skills are equally matched and seamlessly polished…Doug Motel’s moment in the spotlight is now. Discover him before HBO does.”
Critic’s Choice
Arlene Schindler – LA READER